Heather and her super powers

Heather has super powers. Powers so awesome that Glamourmodelmagazine.com Staffer Roger Tally is convinced she doesn’t have any! Let’s take a moment and find out what Roger thought of Heather and her super powers: 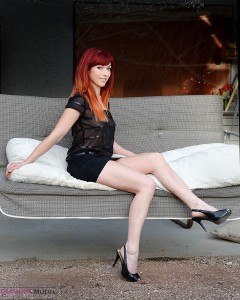 I’ve known Heather for nearly four years. She is, in person, charming and unassuming. She does not have super powers. I know this, because she says so. But if you saw her at work you might be tempted think she has just a bit of the supernatural about her, no matter what she says.

Heather works in Las Veaga as a model and “performer”, which is a simple word that covers a multitude of abilities. Her father was a scoutmaster, which is a good start for learning life skills. Her mother is a scientist – in fact, Heather says she comes from a long line of strong and highly intelligent women. Heather, a “total bibliophile,” fits right in. And it’s not all about performing. She can bake some mean brownies. 🙂

But there’s more. Heather knows horses: she used to muck out horse stalls in return for riding lessons. She is a lifelong ballerina, a fire performer, has been a stilt walker for over six years, and is a budding contortionist. She grew up on the back of her brother’s various motorcycles & dirt bikes, and she was raised by wolves.

“My mom had a 50% white arctic mixed with German shepherd female that she bred with a full white arctic male, so I learned from an early age how to interact with pretty wild animals. At the age of 14 (and a whopping 90 pounds) I had to chase my 120 wolf mix almost daily in the high desert of New Mexico because she was a Houdini about getting out.

“One morning she led me for a merry run, playing the tease, that when I finally got my hands on her she whipped her head around and bit my hand. Well, that pushed me over the edge so I ended up picking her up bodily and slamming her to the ground. Making all sorts of threatening noises. She was a lot better behaved after that.”

That last item likely would not appear on a resume if Heather ever applied to work at the SPCA, but it makes the point: Heather is an alpha wolf. Don’t ever forget it.

And she does not have super powers.