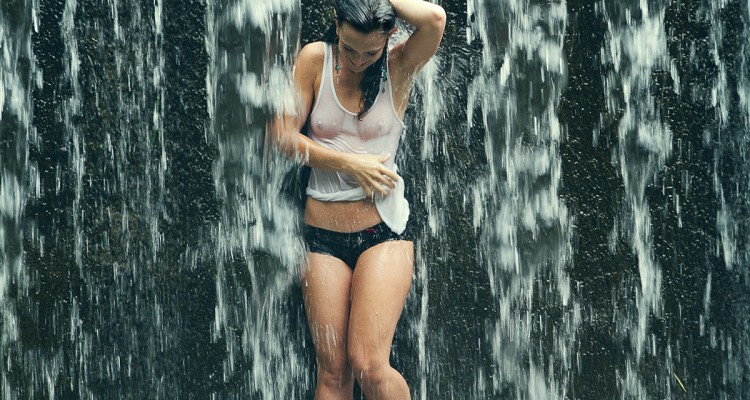 Bre was one of the first well known and accepted models here on GMM. I had spent some time shooting Bre previous to GMM’s creation so it was only natural that I invited her to be featured on GMM. I am a freckles kinda guy. I really am. Those things make me speechless and Bre was filled with them. On top of that, she had the most beautiful face I had seen in some time and of course she worked tirelessly on her body! Bre was willing to challenge herself with in her comfort zone and was always striving to do more.

Bre had accepted the offer to do GMM and my good friend, WCA was driving through on his way to Cali. We agreed that we would shoot a few girls for GMM and I wanted Bre to be one of them. The day of the shoot was a great weather day and the models showed up on time and ready to work. Bre hit the waterfall and worked it…although she was freezing. She continued on for a few more sets and we ended up calling it a session!

Bre was one of three models to hit over 100 Facebook likes on her feature so we decided to do a “Colorado Awesome Foursome” shoot and we got it all worked out together. In the midst of planning, I had gone away from my computer and prepared for the early morning shoot. We had agreed to several times but had to continue adjusting them to meet four people’s busy schedule. Finally, with a 0900hrs time frame in mind, the shoot was set and the four girls were ready to roll.

I got up super early and went to get McDonalds breakfast sandwhiches, some muffins and doughnuts and frut and water. Got back and made sure the camera was ready to go and lens cap off. By 9:20am I began to worry as no one was there. I figured it would be quite the event that everyones Grandma died last night, so I figured they all collectively flaked. Sitting on well over 125.00 worth of food, I became upset and went back to bed. I figured one by one the “Jay, I’m so sorry my Grandma died last night” texts would come in so I shut my phone off. Bre had unbeknowst to me, reschuled the shoot to 11am and no one included or thought to make sure I knew. She called and texted me several times but I didn’t get them. Bre and I haven’t spoken since then. Our Art Director had wanted to get her rescheduled for another shoot but she said she was too busy with school and being hostess’ at a new bar.

I wish Bre the best of luck in all she does!